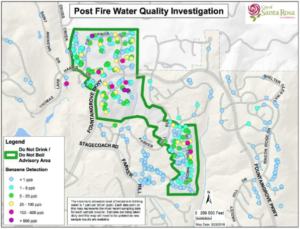 Santa Rosa may be zeroing in on the cause of the contamination in the water supply of the devastated Fountaingrove neighborhood, but there are also troubling signs that the problem may extend beyond the immediate advisory area.

Since Jan. 24, when the city last released detailed test results, the city has found 58 additional instances of benzene in the drinking water in the Fountaingrove area. The vast majority came from the 184-acre area north and south of Fountain Grove Parkway around Fir Ridge Drive, an area once home to 350 families. Only 13 homes remain following the October wildfires.

Residents of the area have been under a strict advisory for months to not drink or boil the water while the city tries to find the source of the contamination and fix the problem, something that could cost upwards of $20 million if the area’s water system needs replacement.

But a handful of tests have recently detected benzene in areas outside the advisory zone, a new development that may complicate the 3-month-long hunt for the cause of the contamination.

In response, the city is launching a more aggressive regimen of water tests covering all the burned areas of the city, including Coffey Park, in its effort to make sure other burn zones aren’t experiencing similar problems.