It is the forgotten killer when compared to our increasingly frequent climate calamities, but the virulent pathogen known as sudden oak death remains active and is spreading death so fast it could destroy California’s coastal forest ecosystem, UC Berkeley scientists reported Thursday.

The deadly microbe has now established itself throughout the Bay Area and has spread along the coast from Monterey to Humboldt County, according to a study of 16,227 trees in 16 counties in Northern California. 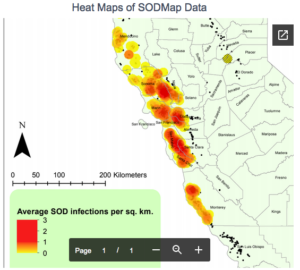 Millions of coast live oak and tan oak trees have withered and died over the past quarter century, leaving acres of kindling for wildfires, but the outbreak this year was one of the worst. Oak trees have historically been abundant in California and southwestern Oregon, with hundreds of millions of them stretching all the way to Baja California.

The rate of trees infected almost doubled in 2019 — from 3.5% to 5.9% — and was 10 times higher in some places compared with the 2018 survey, said Matteo Garbelotto, the director of the UC Berkeley Forest Pathology and Mycology Laboratory, which tested leaf samples taken by 422 volunteers.