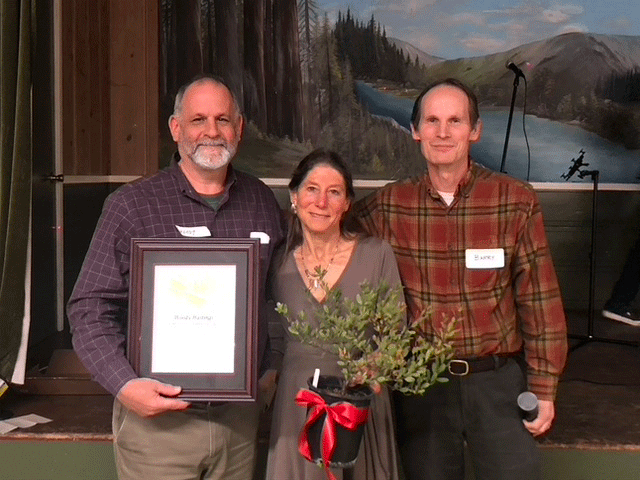 On December 5th, at its Holiday Networking Party, the Sonoma County Conservation Council gave Woody Hastings the Ernestine I. Smith Environmentalist of the Year award, for his work organizing against new gas stations being built in the County — one of the great success stories of 2019.

For the last decade, Woody has worked at the Climate Center, formerly the Center for Climate Protection, using his organizing skills to promote the formation of Sonoma Clean Power, our local CCA, and Community Choice Aggregation in general.

In April, Jenny Baker’s article in the Gazette alerted Woody and the community to a proposed mega-gas-station at Highway 116 and Stony Point Road. The 16-pump gas station, car wash, and minimart would operate around the clock, all year long. Contacting Jenny, Woody offered his assistance. Together they began organizing the community to oppose the station, which would have been one of six within two miles — with an additional two car washes less than two miles away.

Their efforts culminated in a public meeting on June 25th; all the speakers were opposed to the gas station. Less than two weeks later, the developer withdrew the application. Woody proclaimed, “sometime we win!”

Although that battle was won, the war against building more polluting gas stations continues. Key to winning the war is getting the County Board of Supervisors to adopt an ordinance to put new applications for gas stations on hold until the rules for permitting new gas stations have been reviewed and revised. There’s no way to argue that any of the recently proposed stations are needed — all the proposed gas stations are in areas where there are already several gas stations within a small radius.

For nearly two decades Sonoma County has been commited to responding to the climate crisis, starting with a 2002 resolution that committed the County to reduce greenhouse gases from internal operations. Additional actions in 2005, 2006, and 2008, were followed in 2009 when the County and all nine cities formed the Regional Climate Protection Authority to coordinate countywide climate protection efforts, the first such authority in the US. In 2018, the County adopted the “Climate Change Action Resolution” to pursue local actions supporting goals including “encouraging a shift toward low-carbon fuels in vehicles and equipment” and “switching equipment from fossil fuels to electricity.” Our County leaders appear to be committed to a meaningful and effective response to the climate crisis, but why we are now facing proposals for new gas stations? How does that not make a mockery of these past efforts?

For more information see Woody’s op-ed piece in the August Gazette. Check out the Facebook page : https://www.facebook.com/NoMoreGasoline for current information on opposing new gas stations in the County.