Will Schmitt, THE PRESS DEMOCRAT

The Santa Rosa Planning Commission will need to approve the company’s plans before any work on the project can occur and has not put 7-Eleven’s proposal on an agenda, said city planner Adam Ross. 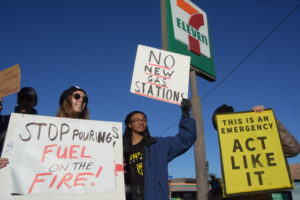 7-Eleven’s plan to demolish one of its east Santa Rosa stores and several surrounding buildings to build a sleek new convenience store and add gas pumps has sparked opposition from activists who oppose new fossil fuel outlets in Sonoma County.

Texas-based 7-Eleven aims to replace the existing shop at Highway 12 and Middle Rincon Road with a new 24-hour convenience store and at least six gas pumps, according to an application filed with Santa Rosa planning officials.

Designs call for demolishing the store, a martial arts studio and at least one adjacent home, forcing longtime tenants to find another place to live.

“If we’re going to extricate ourselves from the fossil world, we’ve got to start now,” said Hastings, who was leading about two dozen protesters outside the 7-Eleven on Monday. They held signs and chanted their opposition to the proposal.

7-Eleven in 2017 bought a chunk of land surrounding its store including an adjacent house occupied by a family. Company officials did not respond to multiple requests for comment about the redevelopment plans. 7-Eleven has more than 70,000 stores worldwide and 11 in the Santa Rosa area.

The company plans to hold another neighborhood meeting to “address concerns,” said Kim Barnett, director of national programs for Tait & Associates, a Rancho Cordova-based firm working with 7-Eleven on the development of the new store and gas station, in an email. She did not provide a date for the meeting.

Barnett described the Rincon Valley project as “a state of the art 7-Eleven” with “fresh foods,” featuring charging stations for electric vehicles and solar power. Though plans call for a car wash, Barnett said “there will be not be a car wash.”