On Wednesday, May 25 Sonoma Water (Sonoma County Water Agency) filed Temporary Urgency Change Petitions (TUCP) with the State Water Resources Control Board to establish a Critical water supply condition for both the upper and lower Russian River as the drought continues.

The current petitions also commit Sonoma Water and its retail customers to a (the cities of Cotati, Petaluma, Rohnert Park, Santa Rosa and Sonoma; the town of Windsor; and Valley of the Moon and North Marin water districts) 20-percent reduction in total diversions from the Russian River between July 1 and October 31 compared to the same time period in 2020.

A coalition of fishery groups has formally notified PG&E that it plans to file suit under the Endangered Species Act, alleging the continued injury to once abundant federally protected salmon and steelhead trout as a result of operations at the utility’s aging Potter Valley powerhouse.

The legal maneuver is part of an effort to expedite removal of Scott and Cape Horn dams, which pose a threat to vulnerable fish species in the Eel River and block access to hundreds of miles of prime habitat upstream.

The plaintiffs contend that last Thursday’s expiration of PG&E’s license for the project means the utility is no longer protected from liability and must be found in violation of the Endangered Species Act — a point the utility disputes.

A formal notice filed Friday by the coalition gives PG&E 60 days to remedy the situation or face litigation. It also echoes comments about project inadequacies made in a March 16 letter from the National Marine Fisheries Service to the Federal Energy Regulatory Commission in advance of the expiration of the utility’s license.

The city of Healdsburg’s draft 2020 Urban Water Management Plan (UWMP) is still a work in progress.

The sentiment was echoed by community members and city council members during a recent council workshop and review of the plan where people expressed concern that the plan is a bit too broad and doesn’t adequately consider climate change in its analysis.

There were also concerns centered around the data points used to inform the plan, especially water usage data, which is not segregated into single family home usage and multi family home usage.

“What we’ve assembled is forecasted demand and supply for a 25-year period. This is a really high-level overview of the city’s supply and demand needs,” Healdsburg Utility Director Terry Crowley said during the virtual, Aug. 23 city council work session.

The outlook for Healdsburg’s forecasted demand and supply levels doesn’t look too sunny. If there’s a single dry year the city may find itself in a position similar to what we’re experiencing now and considering population growth, by 2045, water supply would not meet demands particularly during the drier years.

Curtailments likely for Lower Russian River within a week

From the State Water Board:

With California experiencing a historic drought amid worsening climate change impacts, the state is responding urgently to address acute water supply shortfalls in affected areas. Water in Lake Mendocino is below minimum storage levels and dropping at an alarming rate, threatening supplies for drinking water and endangered fisheries. 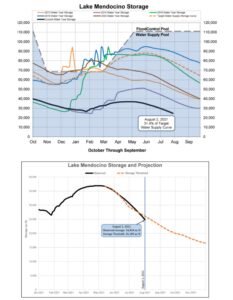 The State Water Board also released an analysis of the Lower Russian River demonstrating that approximately 222 right holders need to be curtailed to meet demands on the river. The board anticipates issuing orders to these right holders next week.

To maintain flows in the Upper Russian River, water is released from Lake Mendocino, a reservoir north of Ukiah. The supplemental water protects multiple fish species and municipal and agricultural uses, and during drought, accounts for all the water in the river. Currently, about 200 acre-feet is released from the lake into the river each day, enough to meet the needs of 400 households per year.

“The lake is declining much faster than anticipated,” said Erik Ekdahl, Deputy Director for the Division of Water Rights. “If the depletions continue at this rate, the 20,000 acre-feet, end-of-season minimum storage level could be reached almost six weeks ahead of schedule. The lake could be entirely empty by the end of the year, putting both people and wildlife in harm’s way.”
END_OF_DOCUMENT_TOKEN_TO_BE_REPLACED

A day long dreaded by hundreds of ranchers, grape growers, farmers, water providers and towns arrived Monday as the state ordered them to stop diverting water from the Russian River watershed or be fined $1,000 a day.

State regulators issued orders effective Tuesday prohibiting about 1,500 water rights holders in the upper river — including the cities of Cloverdale and Healdsburg — from diverting water in an effort to preserve rapidly diminishing supplies in Lake Mendocino.

The State Water Resources Control Board also announced plans to curtail another 310 claims in the lower river watershed as early as Aug. 9 to try to slow the drawdown of Lake Sonoma. Another 500 or so rights in the lower river region between Healdsburg and Jenner remain subject to curtailment as conditions deteriorate.

The order is enforceable by fines up to $1,000 a day or $2,500 for each acre foot diverted. Violations also could draw cease-and-desist demands that could result in fines of up to $10,000 per day, according to the State Water Board.

The restrictions are part of a sweeping, unprecedented attempt to confront a historic drought that water managers fear could extend into a third dry winter.

That would leave the region to struggle through another year using only the water already captured in the two reservoirs. That water is not just for basic human health and safety. It also must be used to keep the river flowing for fish and other wildlife and provide for water rights holders along the way.

The Russian River’s sprawling, manmade delivery system for drinking and irrigation water has for decades relied on a share of the flow in the Eel River, miles to the north in Lake County.

In years past, up to 22 million gallons have been siphoned from the Eel through a system of pumps, pipes and reservoirs and sent south into the East Fork of the Russian River through a mile-and-a-half tunnel blasted into a mountain more than a century ago.

But the future of that cog in the Russian River machine, long seen as critical for farmers, ranchers and rural residents reliant on the river in Mendocino County and northern Sonoma County, is now in limbo.

The water transfer also has generated hydroelectricity as it passed through a small powerhouse in rural Potter Valley and on into Lake Mendocino near Ukiah.

They may be eliminated permanently in the future as a result of PG&E’s decision not to renew its license for the 113-year-old Potter Valley powerhouse when it expires next year, leaving the state of all water transfers from the Eel River uncertain.

The Sonoma County water agency received permission Monday to immediately cut stream flows in the lower Russian River by more than half in an effort to conserve water stored in Lake Sonoma.

Instream flows in the upper river, above Dry Creek, which is fed by releases from Lake Sonoma, already are being maintained at a very low threshold to keep as much water as possible in Lake Mendocino, the smaller of the two reservoirs.

The state decision means Sonoma Water, the county agency, and its contractors — the cities of Santa Rosa, Sonoma, Rohnert Park, Windsor, Petaluma and Cotati, and the Valley of the Moon, Marin Municipal and North Marin water districts — will have to use 20% less water from the Russian River, as well.

Both lakes Sonoma and Mendocino reservoirs are their lowest levels ever for this early in the year, with the warmest, driest months still ahead.

State regulators are considering sweeping drought emergency rules that would let them suspend the diversion of water from the Russian River by as many as 2,400 homes, businesses, municipal agencies and other users. The proposal, which would cover both the upper and lower parts of the watershed, could greatly extend the list of more than 900 water suppliers, agricultural producers and property owners already notified there has been too little rainfall for them to exercise their water rights this year.

The draft regulation goes before the state water board next Tuesday and could account for substantial monthly savings, depending when diversions are limited, Erik Ekdahl, deputy director of the state water board’s Division of Water Rights, said during a virtual Sonoma County Town Hall on the drought last week.

Those affected would include residents of both Sonoma and Mendocino counties, a region singled out by Gov. Gavin Newsom in April for being at particular risk of water shortage after two dry years because of its dependence on a reservoir system subject to rapid depletion in the absence of regular rainfall.

With storage in Lake Mendocino, the smaller of the reservoirs, diminishing by the day, state regulators are hoping they can slow its consumption by reserving withdrawals for those with the oldest, most senior water claims and, potentially, curtailing even them.

Anyone paying attention to the season’s paltry rainfall has seen it coming for some time, but recent pronouncements about the state of the region’s water supply make it plain: hard times lie ahead.

Lake Sonoma and Lake Mendocino are both at their lowest levels ever for this time of year — after two consecutive years in which the combined rainfall totals barely measure up to a single average year.

State water regulators have issued letters notifying more than 700 vineyards, domestic suppliers, farmers and other entities with water rights for the Russian River that their diversions may be curtailed.

Dairy farmers in southern Sonoma County already are trucking thousands of gallons a day to their parched lands, and more than a billion gallons of recycled wastewater normally delivered each year to other agricultural users is simply unavailable, owing to low rainfall and diminished production.

And though it’s only the beginning of April, with months still to go before summer even starts, officials say the overall picture suggests mandated conservation measures aren’t so much a matter of if, but when.

Sandbars are spreading across rain-starved Lake Mendocino, the reservoir near Ukiah that is 35 feet lower than it was a year ago, a grim wintertime sight for the second major source of water for more than 655,000 people in Sonoma, Mendocino and Marin counties.

But the situation would be considerably worse without the payoff from a six-year, $50 million project applying high-tech weather forecasting to management of the reservoir behind Coyote Valley Dam built on the East Fork of the Russian River in 1958.

Thanks to the project, which replaces an inflexible dam operations manual with meteorological science unknown six decades ago, there is 20% more water — nearly 12,000 acre feet — now in Lake Mendocino as the North Bay teeters on the brink of drought.

“Imagine what would have been without this,” said Grant Davis, head of Sonoma Water, the agency that supplies water to 600,000 Sonoma and Marin county residents and another 55,000 people from Mendocino County’s Redwood Valley to Healdsburg.

The program’s success comes as climate change is “exacerbating the feast-or-famine nature of precipitation,” according to Sonoma Water, complicating work in its field and imperiling the supplies that go to tens of millions of residents and agricultural users across the water-scarce western United States.
END_OF_DOCUMENT_TOKEN_TO_BE_REPLACED