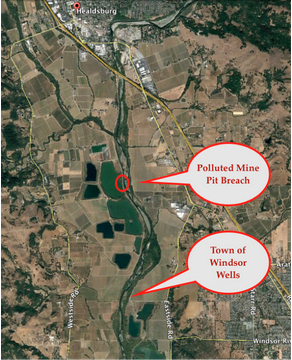 Do you find yourself dismayed or even tormented by images of seabirds, marine mammals, fish and other sealife with their guts full of plastic and other trash?
Here’s your chance to help, and it only takes a few hours.
Saturday marks the 33rd annual California Coastal Cleanup Day, an opportunity to rise to the defense of the ocean and its inhabitants by removing litter from local beaches and watersheds before winter rains and storm surges can sweep it out to sea.
Dozens of sites around the North Coast, both inland and at the ocean’s edge, are among more than 870 locations chosen statewide for volunteer cleanup crews to go to work on Saturday.
Locally, they include state and county beaches along the Sonoma Coast, from Jenner to Bodega Bay, as well as public beaches up and down the Mendocino Coast.But in growing recognition of the volume of discarded litter that washes coastward from rivers and streams, dozens of inland cleanups are planned, as well. Targeted waterways include the Russian River from Ukiah to Monte Rio, the Petaluma River, Santa Rosa Creek, the Laguna de Santa Rosa and several Sonoma-area parks and preserves.
“Ideally, this is the day everybody gives back to clean waterways,” Russian Riverkeeper Executive Director Don McEnhill said.
Read more at: California Coastal Cleanup Day coming Saturday, needs volunteers in Sonoma County | The Press Democrat –

RUSSIAN RIVERKEEPER
In 2003 Riverkeeper engaged residents and activists in the Lower Russian River when the public learned about plans to drop the summer flows in the river by up to 80%.
In 2008, the Russian River Biological Opinion (RRBO) was approved by NOAA Fisheries in order to mitigate negative impacts from the operation of the two Army Corps dams, water supply operations and flood control activities. The RRBO section titled “reasonable and prudent alternatives” stated that salmon would benefit if we cut summer flows by 70% in an attempt to improve estuary conditions for juvenile salmon by maintaining a closed estuary. The rationale was that lower flows would help maintain a closed estuary but over the last several years it is clear that goal will be difficult to meet due to natural ocean conditions.
At that time, Riverkeeper stated that cutting flows would increase nutrient concentrations and end up harming juvenile salmon in the estuary by growing too much algae, which affects dissolved oxygen levels. Fast forward to last summer and we had flows in the 70 cubic feet per second range that is close to the proposed 70% reduction and we had our first ever toxic algae outbreak that killed at least two dogs.
At the same time, our understanding of fish population dynamics supported by many fishery biologists is that food production in the river above the estuary would be negatively affected by cutting flows by up to 70%.
The Draft EIR was released from the Sonoma County Water Agency in mid-August. Read the EIR here.
Russian Riverkeeper is concerned with likely water quality problems if flows are allowed to stay below 100cfs throughout the summer months. One of our goals is to ensure water saved from reduced flows is not put up for sale but reserved to mitigate potential water quality impacts.
The comment period for this Draft EIR ended on Friday, March 10.  The Sonoma County Water Agency now will read all the comments and questions, and will reply to all of them.  They hope to have the Final EIR done by the end of 2017.  Then it goes to the State Water Resources Control Board for final approval.
Click here to read Russian Riverkeeper’s protest letter to the State Water Resources Control Board:   RussianRiverKeeper Protest Pet12497a 9Mar17
Source: Russian River “Low Flow E.I.R.” | Russian Riverkeeper

People who want to give feedback about a plan to cut summertime flows in the Russian River and Dry Creek will have two opportunities to do so in person this week at public hearings.
The sessions, in Cloverdale on Wednesday and Guerneville on Thursday, are being hosted by the Sonoma County Water Agency, which is in the midst of environmental review for a series of proposed changes to water releases from Lakes Mendocino and Sonoma.
The proposals, if approved by state water regulators, would permanently drop stream flows during summer to improve habitat for imperiled juvenile coho salmon and steelhead trout.
But summer is also peak season for river recreation, raising fears about the impact on business and tourism, particularly among communities on the lower river, where seasonal flows would be cut by nearly half, even in wet weather years.
Many critics also believe reducing reservoir releases will contribute to the kind of warm, stagnant conditions that have produced toxic algae blooms in the Russian River and other water bodies around California during the past two summers. Low-flow conditions can also concentrate pollutants from runoff and other sources, reducing water quality.
Among those challenging the wisdom of the proposed changes is the Russian Riverkeeper advocacy and stewardship group, whose leaders contend that even cutting the river flow will not be enough to keep the river estuary closed for young salmon in summer, given ocean dynamics that shift the sand bar at the river’s mouth so often.
Read more at: Public hearings set for Russian River low-flow plan | The Press Democrat

Tony Landucci, SONOMA WEST TIMES & NEWS
Almost 100 people took part in the Splash Mob event over the weekend, the conclusion of a nine day trip down the Russian River, starting at Lake Mendocino. Conservation nonprofit LandPaths and Russian Riverkeeper hosted the Headwaters to Ocean Descent with Supervisor James Gore.
In the cool morning air at the beach in Monte Rio the first half of the two-day Splash Mob launched kayaks and several canoes into the chilly water as vacationers and beach goes watched. On Sunday, many faces were familiar but new people replaced the ones who could not ride for the whole paddle.
The stream of about 40 boats cruised the water down to Casini Ranch  Family Campground in Jenner where many camped before the final day of paddling to mouth of the river. While the trip was almost entirely manageable for beginners, strong winds pushed back on paddlers as they powered their way under the Coast Highway bridge near where Highways 1 and 116 meet. The day went without incident and everyone made it to the shore safely.
Along the way, conversations were held as long as boaters could stick together. As skill levels and stamina were tested, the groups mingled, drifted apart and came back together. Backgrounds varied but many on the trip were in someway connected to the river through their jobs and education or were just interested in what the event had to offer. Biologists answered questions about ecology while water district workers explained regulations and policies, among other conversations.
Read more at: River float brings ideas to surface – Sonoma West Times and News: News