Hundreds of feet above the ground, suspended by ropes and battered by powerful winds, Matthew Kelly is living his best life.

Kelly is a wind turbine technician, and my colleague Brian van der Brug recently took pictures of him repairing a fiberglass blade at a wind farm in California’s Montezuma Hills, at the northeastern end of the Bay Area. Brian’s pictures are worth a thousand words and then some. Here’s a shot of Kelly perched on the damaged blade, putting his rock climbing background to good use: 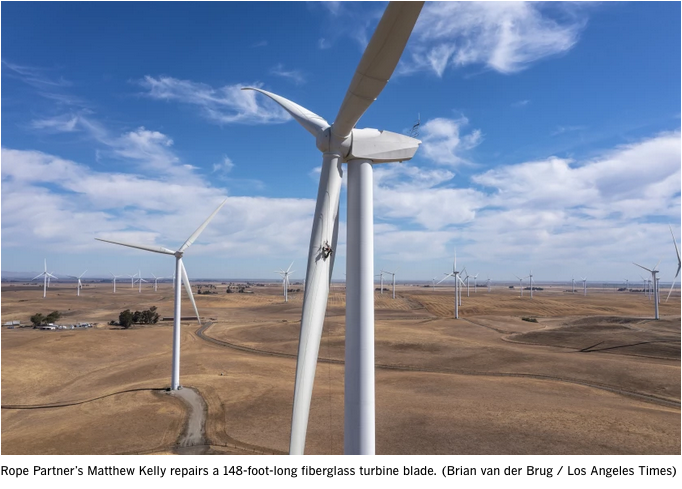 Cerro Pabellón, Chile — It looks and functions much like an oil drilling rig. As it happens, several of the men in thick blue overalls and white helmets who operate the hulking machine once made a living pumping crude.

But now they are surrounded by snowcapped volcanoes, laboring to breathe up here at 14,760 feet above sea level as they draw steam from the earth at South America’s first geothermal energy plant.

With the ability to power roughly 165,000 homes, the new plant is yet another step in Chile’s clean energy transformation. This nation’s rapidly expanding clean energy grid, which includes vast solar fields and wind farms, is one of the most ambitious in a region that is decisively moving beyond fossil fuels.

Latin America already has the world’s cleanest electricity, having long relied on dams to generate a large share of its energy needs, according to the World Bank.

But even beyond those big hydropower projects, investment in renewable energy in Latin America has increased 11-fold since 2004, nearly double the global rate, according to a 2016 report by the International Renewable Energy Agency, an intergovernmental organization. Chile, Mexico and Brazil are now among the top 10 renewable energy markets in the world.

So as Latin America embraces greener energy sources, government officials and industry executives in the region have expressed a sense of confusion, even bewilderment, with the Trump administration’s decision to withdraw from the climate change commitments contained in the Paris Agreement, declare an end to the “war on coal” and take aim at American environmental regulations.

Staff Report, NORTH BAY BUSINESS JOURNAL
Sonoma Clean Power broke ground today on a project that will update an existing wind power facility and bring more wind power in-state. The Golden Hills North Wind Facility, in the western central valley community of Tracy, will remove 283 30-year-old wind turbines and replace them with 20 2.3-megawatt GE turbines, capable of generating more power with twice the efficiency of the previous wind project.
Sonoma Clean Power is a a community choice aggregation, or CCA, organization, created under state policy that allow local governments to pool their electricity load so they can provide alternative energy sources. Currently, most wind energy in SCP”s portfolio comes from Oregon. The Golden Hills facility is forecasted to cover 6 percent of SCP’s load starting in 2018. The contract term is 20 years from full commercial operation date.
“Repowered wind facilities carry multiple benefits,” said Geof Syphers, SCP’s CEO. “One modern wind turbine replaces 21 of the old-style turbines, producing more energy. This is low-cost, clean electricity that will serve our customers of Sonoma and Mendocino counties.”
SCP is partnering with wholesale electric power generator NextEra Energy Resources. An affiliate of that company owns and will operate the wind project.
The wind project will have a generating capacity of 46 megawatts, enough to power more than 13,500 homes.SCP’s announcement stated the project will also create hundreds of union jobs during the construction phase, beginning this month, and will provide full-time employment opportunities once the project is operational at the end of 2017. The project will provide more than $10 million in property tax benefits over its projected 30-year operational life.
Fewer wind turbines will also significantly reduces bird strikes.
Source: Sonoma Clean Power adds wind to energy sourcing | The North Bay Business Journal

Diane Cardwell and Clifford Krauss, THE NEW YORK TIMES
In Southern California in the fall of 2015, a giant natural gas leak not only caused one of the worst environmental disasters in the nation’s history, it also knocked out a critical fuel source for regional power plants.
Energy regulators needed a quick fix.
But rather than sticking with gas, they turned to a technology more closely associated with flashlights: batteries. They freed up the utilities to start installing batteries — and lots of them.

It is a solution that’s audacious and risky. The idea is that the batteries can store electricity during daylight hours (when the state’s many solar panels are flooding the grid with power), then release it as demand peaks (early evening, when people get home). In effect, the rechargeable batteries are like an on-demand power plant, and, in theory, able to replace an actual plant.

Utilities have been studying batteries nationwide. But none have moved ahead with the gusto of those in Southern California.

This idea has far-reaching potential. But the challenge of storing electricity has vexed engineers, researchers, policy makers and entrepreneurs for centuries. Even as countless technologies have raced ahead, batteries haven’t yet fulfilled their promise.

And the most powerful new designs come with their own risks, such as fire or explosion if poorly made or maintained. It’s the same problem that forced Samsung to recall 2.5 million Galaxy Note 7 smartphones in September because of fire risk.

After racing for months, engineers here in California have brought three energy-storage sites close to completion to begin serving the Southern California electric grid within the next month. They are made up of thousands of oversize versions of the lithium-ion batteries now widely used in smartphones, laptop computers and other digital devices.

Read more at: A Big Test for Big Batteries – The New York Times